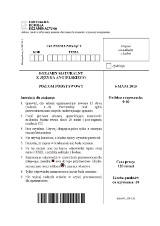 ROZUMIENIE SŁUCHANEGO TEKSTU
Tekst do zadania 1.
Good afternoon! Let me remind you that this month, like in previous years, our school will organise a Thanksgiving quiz. This year, however, the competition will not be a one-day event held in the classrooms. This time it will have two stages. The first one will take the form of an online quiz. You can do the quiz on our school website any time from 17th to 22nd of November. The quiz will test your knowledge of the history and customs of Thanksgiving. As soon as you finish the quiz, you will see your score. There is no need to click on anything. The result will appear automatically on the screen just after you answer the last question. There is a total of 500 points. The competitors with at least 400 points will qualify for the next stage which will be held in our library on November 23rd. The jury, consisting of our school teachers, will ask questions and then choose five finalists. We have prepared a lot of prizes including posters, photo albums and theatre tickets and every finalist will be awarded one. The person with the highest score is the winner, who will get an additional prize – a roast turkey. I wish you the best of luck!
adapted from www.evancarmichael.com

1.1. The Thanksgiving quiz will have a different form this year.
1.2. Students need to click the “result” button to get their scores.
1.3. Five hundred points is the minimum necessary to get to the second stage.
1.4. The student with the best result will get two prizes.
1.5. The speaker informs listeners how to prepare well for the quiz.

Teksty do zadania 2
One
People see all kinds of creatures on the side of the road in California, but they’re not usually ocean animals. So imagine one teenager’s surprise when he saw a young sea lion that needed help. It was thin and seriously injured. The boy managed to carry the animal to his car and drove to the local zoo. The zoo workers said they weren’t sure if the young animal would survive but fortunately after a few days it got better.
Two
Last night two police officers tried to arrest a burglar. They sent a police dog, called Jaris, into the building to frighten the thief. When the man was fighting with Jaris, the dog fell off a balcony. The officers arrested the man and the brave dog was taken to a veterinary clinic with a broken leg. Everybody hopes Jaris will be able to return to work soon.
Three
Over the past two years, our zoo has collected $14 million to build a new area for polar bears. It opened last weekend and visitors to the zoo had a chance to see a playful baby polar bear for the very first time. Luna, that’s what the bear is called, is a few months old. She was out for only about an hour. She mainly played with her toys. The children watching her were
really excited.
Four
A farmer from Arizona is doing some major cleaning after two bears broke into his house on Wednesday. Justin Lee says he was upstairs when he heard his dog barking and decided to check what was going on. To his surprise, he found two bears downstairs. He was frightened and ran upstairs. He called for help immediately. The animals entered through a glass door and helped themselves to the food on the kitchen table. By the time police officers arrived on the farm, the bears had already run away.
Five
Max and Bella have recently touched the hearts of people all over social media. What makes these dogs special is that one of them is blind and the other is his guide. They were found together in the centre of Mansfield. An animal rescue group is now looking for a loving family which would like to take care of them. Max and Bella are at present staying with a local vet.
adapted from http://abclocal.go.com